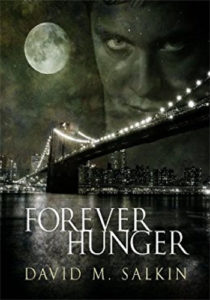 When NYPD Sergeant Roy Ruiz began working the serial killings with Detective Tim Rosetto, they had no way of knowing the killer whom they were hunting had been dead for over two hundred years. The grisly crime scenes leave plenty of forensic evidence, but unfortunately, none of it makes any sense—unless you can open your mind to some very strange possibilities.

FBI Special Agent Doug Patmore, whose special unit works with Missing Persons, Unsolved Violent Crimes, Homicide, and Sexual Assaults has been hunting this killer for years. Together with Roy and Tim, they begin their mind bending investigation that will lead them to Adam Priest—a man that’s been killing and eating women since 1806.

Adam was a lowly Prussian soldier when he was attacked in the woods after the battle of Jena, and the attack changed him forever. It killed the man and created a monster with a hunger for blood that was insatiable. For two hundred years, Adam fed without remorse—until he met Sara. Now, with an emotion almost human tugging at his dead heart, he must decide what to do about Sara as the police get closer with each feeding.

Buy it on Amazon U.S.