Science Fiction Legend Ben Bova says, “DEEP BLACK SEA is science fiction at its best, a realistic tale of exploration and danger, written by a man who knows the details of deep-sea exploration firsthand. An exciting read.” 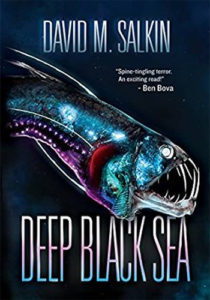 When President Roberts was elected in 2020, his acceptance speech included references to exploring inner space and the oceans as a priority that could no longer be ignored. While his predecessor had promised a Mars mission that excited NASA, President Roberts immediately began making sweeping changes in the funding priorities of NASA, NOAA (National Oceanic and Atmospheric Administration) and the United States Navy. Within two months of taking office, Roberts had replaced the head of NASA with former U.S. Navy pilot-turned-astronaut Rear Admiral Thomas Antus, and unveiled his bold plan to see a deep-sea research station built to rival the international space station. Citing similar hurtles in both space and deep-sea exploration; Roberts announced that the deep-sea station would be a joint-effort between NASA, NOAA and the Navy. What it meant for the Mars mission was a huge budget cut that would delay the space mission indefinitely, but for those scientists that had been the pioneers of deep-sea exploration, it meant funding the likes of which they never could have dreamed.

With a crew of seven, the Challenger submerges three miles below the waves for a one-year mission to study the hidden world of the deep black sea. One of the team members, Ted Bell, is a former NASA scientist with his own agenda. He is much more interested in learning about the Deinococcus radiodurans bacteria that keeps sea animals alive in seven-hundred-degree, superheated water that is full of heavy metals and other toxins that flows from the “black smokers”. Ted’s ultimate goal is a mission to Mars, and if it means sacrificing the deep sea crew to advance that mission, then so be it.

How is it that sea animals can live and reproduce in water that should boil them? Superheated water that is full of toxins and heavy metals, and contains almost no oxygen should be void of life on planet Earth—and yet it is teeming with it. The answer to the puzzle lies in the bacteria, and Ted knows it. Convinced that the same symbiotic relationship between the sea life and bacteria can be reproduced in humans, and then used to help humans travel to Mars one day, Ted intentionally infects a few members the crew.

Just as the bacterium forces a metamorphosis in the tubeworms and other animals as the bacterium take over their host, Ted’s infected crewmates also begin their rapid transformation. And while Ted is initially thrilled with his experiments, he quickly realizes that he has lost control. As his remaining crewmates realize that they have a traitor in their midst, the fight for survival begins three miles under the waves.

With two crew members transformed into “something else” and loose in the ship, the remaining crew must find a way to kill the deadly creatures that used to be their friends.

Buy it on Amazon U.S.

Buy it on Smashwords

Buy it on iTunes