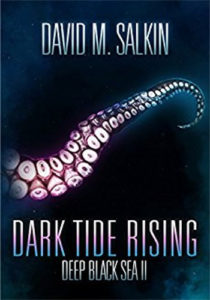 A pleasure yacht is under attack by unknown sea creatures.

A Coast Guard crew is massacred by something not of this world.

Ted Bell had only one personal goal—to reach Mars. He believed that harnessing the power of the deep-sea bacteria that allows creatures to live in super-heated, poisonous water might get humans to deep space. But when Ted intentionally infected a member of the crew for his own agenda, it didn’t go as planned. A new life form was created–completely out of control. Ted’s failed experiment doomed the crew of the USS Challenger.

After living through the terrifying disaster that killed half the crew, three survivors think they have escaped the nightmare. Instead, the creatures have risen from the depths–and the three discover that the horrifying experience on the Challenger was only the beginning.

Buy on Amazon US