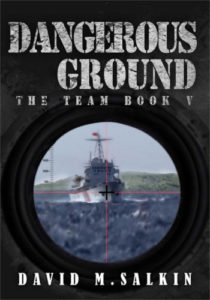 The South China Sea is a dangerous place. China, Vietnam, Malaysia, and Brunei are all building artificial islands in an attempt to claim territorial waters. When the United States discovers that a long missing twenty-megaton nuclear bomb—a “Broken Arrow”—sits at six hundred feet, right next to the construction of a new island, The Team is dispatched to recover it.

With Chinese fighter jets buzzing US Navy ships, ISIS fighters in Brunei preparing for an attack on Singapore, and two reporters from New Zealand begging for rescue from ISIS pursuers, it’s a mission that will test The Team.

Posing as Canadian oilmen working on an off-shore oil platform, The Team is tasked with recovering two nuclear weapons lost almost thirty years ago when a US bomber went down. The problem? Not only is Brunei building an artificial island right next to the wreck-site, they’re also harboring an ISIS training facility.