Readers of THE TEAM series know that our cast of characters is comprised of US Navy SEALs, USMC Force Recon Marines, Army Rangers and CIA agents. Imagine my surprise when I attended a presentation on coral reef restoration and met the Team of American Super-Heroes in real life!

Force Blue is literally a Team of Special Forces veterans comprised of almost element of the armed forces. SEALs, Recon Marines, a Green Berets, an Air Force Para-Rescue Jumper, even a British Commando–just to name a few. These veterans left the service after years of combat, and found themselves without a mission. Well, they’ve solved that problem…

Force Blue is now a Team of Special Forces veterans, some of whom were combat divers, re-tooled to protect the fragile reef eco-system. Their motto, “Giving Warriors a Cause, Giving A Cause its Warriors” encapsulates their group perfectly. These highly trained veterans are now learning the methods of coral restoration that will “re-plant” coral in the wild in places where the coral reefs are collapsing. Coral is highly sensitive, and for a myriad of reasons, the world’s coral reefs are in decline. Without intervention by mankind, the oceans may lose this vital part of the ocean’s eco-system.

I’ve been diving for over 30 years, and have been fortunate enough to dive in many parts of the world. I’m a self-admitted “fish geek” and have kept a coral reef tank in my home for over 15 years. I’ve “fragged” my own coral to generate new growth. (Coral fragging is the process of cutting off small branches of coral, or cutting coral heads, and then carefully gluing them to reef plugs that can be affixed elsewhere to spawn new growth. When done systematically, it can have great results.) As a Master Diver and lover of the ocean, I’ve been concerned for many years about the state of our oceans. I’ve logged hundreds of dives, and can only recall ONE where I didn’t see any sign of human pollution. On every other dive, I’ve come across SOME form of plastic or pollution, and it’s very disheartening. It’s my personal opinion that plastics are the biggest harm to the earth in existence. While folks are constantly talking about “climate change”, I’m MUCH more concerned about pollution in general, particularly the effects of plastics on the environment. There are oceanic gyres–huge floating garbage patches the size of some countries, in every part of the ocean. It’s nothing short of horrifying. All of this plays a part in the destruction of the earth’s coral reefs.

Force Blue is now actively restoring the reefs, and offering hope not only to the coral, but to these combat veterans who needed a new mission. It was an honor getting to meet these folks, and I wish my Team readers would meet them, too. Take a look at the website… watch their video… maybe even donate some money to help keep them funded. Whatever you can do to help!

I’ve been writing THE TEAM series for several years now. It was truly an honor and privilege to meet the REAL TEAM! 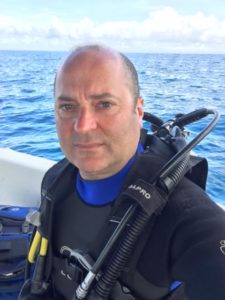