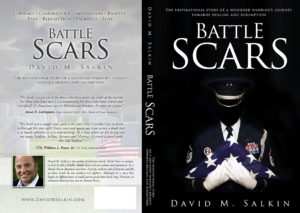 David M. Salkin will be making an appearance for Dr. Richard Trimble at the Ocean County College Military History Institute on December 18th. The Monday night class will include a guest lecture followed by a book signing. BATTLE SCARS has been added to Dr. Trimble’s reading list for his military history class.

“It’s a great honor to speak to Dr. Trimble’s class about Battle Scars. I think it’s an important book to help students understand the real sacrifices and hardships our modern war fighters face each day. Books like What They Carried, The 13th Valley, and now Battle Scars, give the reader a behind-the-movie-screen look at real life. This story is fiction, but the main character is an amalgamation of many veterans I have met and tried to assist over the years. Fiction or not, the story is raw and real. Because it’s a novella, you can read it in three hours – but I think it will stay with your for a few days.”

To arrange speaking engagements for schools, book clubs, or other venues, contact Dave at DMSalkinAuthor@Gmail.com

“This book was a tough read, and at the same time I couldn’t put it down. Salkin got this one right! Every now and again you come across a book that is as much cathartic as it is entertaining. At a time when we are losing way too many Soldiers, Sailors, Airmen and Marines, it struck a chord  with this Old Soldier.”

“David Salkin has fired at close range and with unerring accuracy with this tale! He takes a tough situation that is all-too-often neglected and gives it life. This story is for all veterans and their supporters. His first-person writing style makes the reader feel present throughout the story. It’s a quick read that will leave you thinking long after completion. I most strongly recommend it to all who are interested in understanding better the true costs of America’s conflicts—past, present, and future. “

“David Salkin is a masterful writer, I felt as if I was riding along in that up armored HUMVEE. Battle Scars is an incredible story of brothers in arms and the bonds formed in combat. The struggles that are faced by combat veterans returning from war are real and nothing I’ve read brings that story to life like Battle Scars. This is a must read!”

“For anyone who’s ever been there, this book brings back all the sights, sounds and smells of deployment like none other. Take care in the reading because Battle Scars is real. An often painful, always enthralling reminder of what we give…and what we lose…whenever we send our men and women to war. Mr. Salkin brought to life the pain and struggles of our fellow veterans and showed an accurate account of their bravery off the field.”