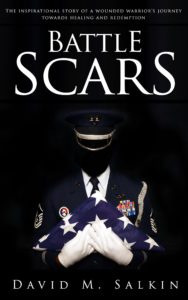 Marine Corporal Sean Nichols is wounded in a devastating ambush that takes the lives of his three friends and leaves him an amputee. If not for the heroism of his sergeant, Deke Tilman, who pulled him out of the road, Sean would have surely died with his fire team. With the help of Deke, Sean now embarks on his next mission—recuperate from his serious injuries, and visit the families of his fallen comrades as he tries to make peace with such profound loss.

Battle Scars is a thought provoking drama with compelling characters that illustrates the resiliency and strength of the human spirit, the power of love and friendship, and the ability to overcome even our darkest moments. Gritty realism and original storytelling breathe life into Battle Scars as it inspires us with a surprising tale of heroism and the great sacrifice made by our modern war fighters. A Novella you can read in a few hours, but will think about for days.

“Battle Scars is an incredible story of brothers in arms and the bonds formed in combat. The struggles that are faced by combat veterans returning from war are real and nothing I’ve read brings that story to life like Battle Scars. This is a must read!”
LTCOL T. Kevin White “TK”
150th Special Operations Wing

“This book was a tough read, and at the same time I couldn’t put it down. Salkin got this one right! Every now and again you come across a book that is as much cathartic as it is entertaining. At a time when we are losing way too many Soldiers, Sailors, Airmen and Marines, it struck a chord with this Old Soldier.”
COL William L. Peace, Sr.
U.S. Army National Guard

“David Salkin has fired at close range and with unerring accuracy with this tale! He takes a tough situation that is all-too-often neglected and gives it life. This story is for all veterans and their supporters. His first-person writing style makes the reader feel present throughout the story. It’s a quick read that will leave you thinking long after completion. I most strongly recommend it to all who are interested in understanding better the true costs of America’s conflicts—past, present, and future. “
Major General GT Garrett, USA (Ret)
42nd Infantry Division

“Dave hit the nail on the head with this one. It’s a quick read simply because you don’t want to stop turning the page. This may be fiction but it certainly doesn’t read that way.”
Neil T. Roeder, LTC, MS USAR

“David Salkin’s story is a must-read for all Veterans and supporters. This book not only entertains you, it educates you on the price paid by those who have the guts to walk the walk. His first-person writing takes you on a ride which seems to bring out all emotions and it also places you right on the battlefield. Maybe it’s just my love of heroic deeds but it sure knocked me on my knees. The read is overall life-like and is very consistent with the actions taking place every day in Iraq and Afghanistan. Kudos to Dave for really knocking this one out of the park” Christian S. DiMeo (Ret) SFC.
USMC / Embassy Marine Cairo/Beirut/Geneva
–ARMY NG / Operation Enduring Freedom

“Battle Scars” hits like an RPG! Camaraderie, adrenaline, fear, loss, hope and redemption all in one exhilarating and disturbingly beautiful tale. Hard to believe David hasn’t been on the battlefield, because this tale rocked me back for days! A must read for everyone who is, has been, or supports our warriors!”
Wayne Emery CPT, USA MACV Vietnam