Ben Bova says, “David M. Salkin’s HARD CARBON is a taut, fast-paced thriller that takes the reader into the deadly yet fascinating world of Russian oligarchs and American intelligence agencies. Be warned, you’ll have a hard time putting this one down, once you start reading it.” 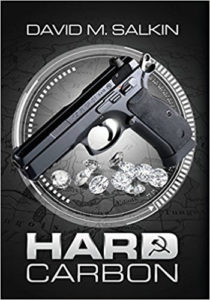 Ivan “The Butcher” Bulovski, is the ruthless head of the Russian Mob in Moscow. His organization is more powerful than some countries. Employing out-of-work Russian scientists and diamond cutters, The Butcher succeeds in developing synthetic diamond thin-films to create the next generation of super-computers. These computers will be used for the largest bank heist in world history.

Just two obstacles stand in The Butcher’s way—the FBI is following the bodies that lead from New York City to Moscow, and are getting closer every day; and one of Ivan’s diamond cutters got spooked and took off with “The Star of Moscow”. Max, an old diamond cutter who is terrified of The Butcher, doesn’t know the flawless diamond is synthetic. If discovered, this diamond may unravel all of Ivan’s multi-billion dollar plans.

With so much as stake, The Butcher sends his former-Spetsnaz body guards after Max to track down his diamond, while evading the FBI until he can unleash his computer on the World Wide Web and crack every major bank around the globe. A rich story woven with high-tech computers, old world characters, unlikely heroes and action around the globe, Hard Carbon offers a glimpse into the diamond trade and cyber security

Buy it on Amazon US

Buy it on Smashwords

Buy it on Kobo

Buy it on iTunes